Backup Exec 16: Backupscriptdetail is NULL! And now what?

Recently, an error message “Backupscriptdetail is NULL” has been displayed when calling an existing job on a server that has been running for some time.

In our case, 2 out of 6 backup jobs could not be started, edited or even deleted.
The jobs hung in the GUI without any interaction with them.

There was only the error message “Backup script detail is NULL”. 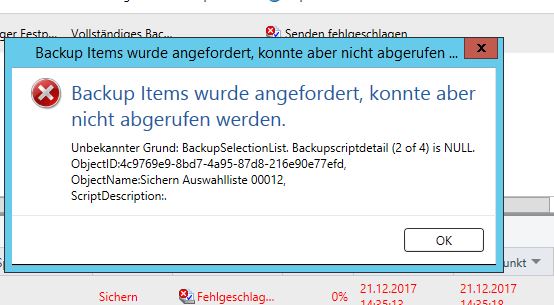 Any actions using Backup Exec Utility Tool were unsuccessful. The database was checked for consistency, old index entries were updated. Even an existing database dump from the previous day was imported. However, the problem remains.

It is, of course possible to create new jobs, but you want to remove the defective jobs from your BackupExec server.

The solution to this problem was to delete the respective entries in the Backup Exec database. This can be done together with Veritas Support or you can do it yourself.

First, all Backup Exec services have to be stopped and then the SQL database has to be backed up. This can be done either via the Backup Exec utilities tools, or via Microsoft SQL Management Studio.

Afterwards, the following statement is used in SQL Management Studio to find out the job informations for the faulty jobs.

Alternatively, you can also select the top 200 from the dbo. jobs table.
Now write down the information of the following fields:

These values are now used for the following SQL statements.
Attention: The tables contents of the database will be deleted.

Finally, you can restart all Backup Exec services and create the jobs again.

In the aftermath it also became clear how this problem came about.

A few weeks ago, the AntiVirus scanner on the Backup Exec Server was updated. There were sporadic crashes of the BackupExec service while backup jobs were running.

(642)
333,00 € (as of 1. February 2023 08:45 GMT +01:00 - More infoProduct prices and availability are accurate as of the date/time indicated and are subject to change. Any price and availability information displayed on [relevant Amazon Site(s), as applicable] at the time of purchase will apply to the purchase of this product.)

The reason for this was that the AV-Scanner scanned files in the directory “C: \ProgramData\Veritas\CRF” and manipulated them for BackupExec. This led to failure of the Backup Exec service and errors within the database.

This folder had to be excluded from the AV scanner for scanning.